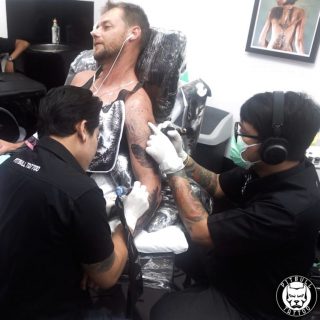 Benny, Australian guy from Sydney, 35 years old, choose to get tattooed as a Warrior at Pitbull Tattoo Phuket.

He contacted us by Facebook and made a booking online. He had only 2 days to do a full arm sleeve + half chest in Realistic Black and Grey. We did it so easy in the warrior way! 2 artists at the same time on his arm!

He started the outer arm on the first day, then fill up the inner arm and chest the second day. The work was completely done in 2 days!

Benny is our new “Warriors Tattooed” that proudly joined the Pitbull Tattoo Family! 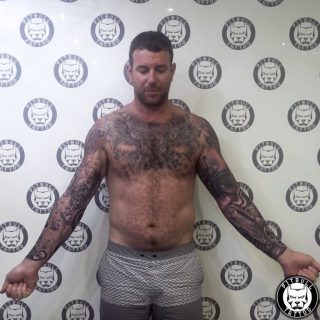 Anthony, an Australian guy in his thirties was looking to get some ink done in Phuket.

He searched on google for the best tattoo shops and saw our work. His friend also recommended this place and got some ink as well.

Anthony got black and grey realistic “Rat Fink” on one arm, and on the other Chicano style.

He was a tough guy, smiling the whole time and he completed this two arm sleeves in three sessions.

Welcome to our warrior family Anthony! You earned your spot here. 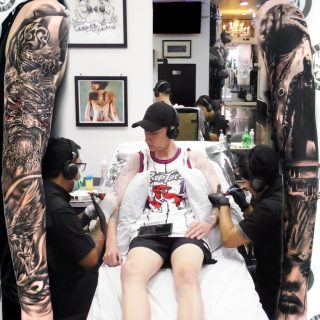 Conan our newest warrior! Only 21 this Australian guy found us by looking on Instagram and searching up hashtags and saw that we were the first to pop up.

He saw our work and instantly wanted to book. He got one side which was a horror theme and the other side was Celtic Viking.

The first session Conan had no problem, but when it came down to the end it was extremely painful. But he pushed through and finished it all within two sessions.

Only the strong survive here at Pitbull Tattoo! Welcome Conan to our warrior family! 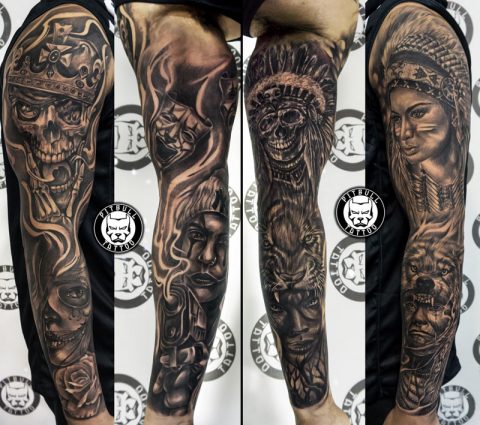 Our new “Warrior”, a young Australian guy from Melbourne, 23 years old. Aziz discovered us by surfing on Facebook… He started to follow our page, then contact us… The feeling was great and Aziz goes straight to the point: 2 full arm sleeves in Black & Grey style… 1 Chicano and 1 American native.

Everything by 2 artists at the same time! In only 2 sessions!!!

Aziz was strong enough to get inked for 10 hours a day. ONLY THE STRONG SURVIVE!!! Things started to get painful towards the last hour before getting to the final results… But the pain was worth it:

Aziz is our younger Warrior! Welcome to Pitbull Tattoo Family! 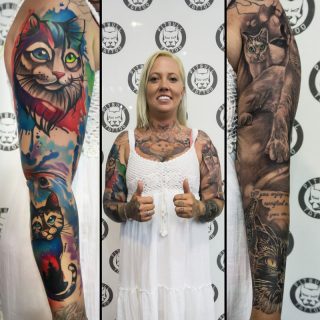 Ally, an Australian woman in her thirties, came as a walk-in customer. She had a very good feeling and loved the vibe the minute she put foot through the door at Pitbull Tattoo Studio. she decided to go ahead with 2 full arm sleeves: One in color, and the other one in realistic black and grey.

Ally is the first brave warrior woman who proudly had two full arm sleeves made by two artists at the same time…. The warrior way!!! Congratulations!

Our cat lover was very peaceful… although she should have been in pain, she defiantly did not show it. She impressed all the staff here at Pitbull Tattoo Phuket!

After only two full day sessions, both sleeves were done. 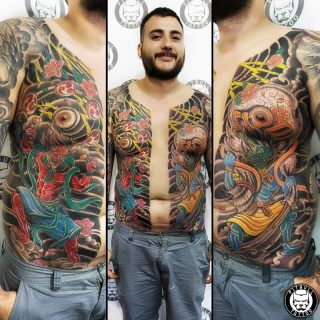 “Mike” is back – Tattooed Warrior

After a few weeks of being out of Thailand, Mike felt the urge to get more ink… only this time on his front body, so he decided to fly back to Phuket again to finish his body tattoo suite.

He got his front body tattoo following the Japanese theme tattoo he had on his own back… now he got the same style exactly like a famous Yakuza Member ???.

while … the first session had started with two hours of freehand work done on Mike’s skin. The design was made by Tony, the specialist in the house for freehand and Japanese tattoos.

Having tattoos on that body part is very hard because it is very sensitive, and you need to be very strong like Mike to survive it?!

Another day, another session. Mike is back in the studio and, ready like never before starting early by filling out one side on his body front. You should see how strong Mike was on this day, getting ink on his skin for hours and hours…

End of the day done with Amazing results. He is ready for the second side…

Two days later, determined, Mike came back to finish the rest of his body were the ink was missing??

After spending all day in the tattoo bed, slowly the MASTERPIECE started to show its amazing results

10 hours later, the night was coming to an end at Pitbull studio, finally!! The moment mike had been waiting for the whole time… being able to stand up with his front body MASTERPIECE done and dusted!!

We’ve never seen such strong determination done before. In between two months, mike had a full back, full bottom, full leg and full front tattoo done all in Japanese Style!

We are proud of this strong surviving Warrior, as always we will be waiting to see you again Mike to make the rest of you covered in ink … ONLY THE STRONG SURVIVE!!! 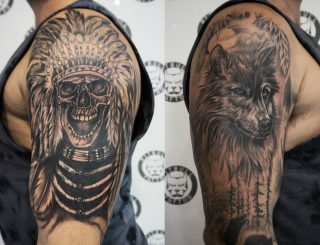 Peter from Australia, Victoria, 31 years old. comes to the Best Tattoo Studio in Phuket by his friend’s recommendation. He wants a Realistic full leg sleeve artwork and also a tattoo remake on his two upper arms and stomach tattoo as well…

He started a full leg sleeve Tattoo by our artist Ton. Everything ended very well with Peter, a smiling strong guy, without feeling any pain a masterpiece done once again in two tattoo sessions…

Once he had both upper arms done… Ink addiction starting to get over… He had also Tattooed his stomach… NO PROBLEM Ton did it with passion and dedication… JOB DONE!!! Peter is now another one of our Warrior Team. Join the Pitbull Family!!! 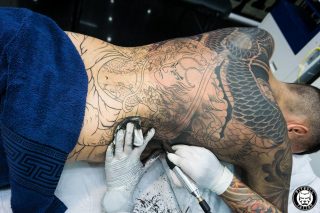 Mike is an Australian guy, 27 years old living in Belgium. He came several times to visit our tattoo studio in Patong.

Mike is a regular customer who trusts only Pitbull Tattoo Phuket to get inked. He doesn’t hesitate to make trips often to Thailand, to visit us!

Masterpiece started by freehand drawing on his own skin made by our free hand MASTER artist Tony and he spent more than one hour to design it… OUTLINES DONE.

The first session was followed by 6 more sessions before the whole tattoo work was done.

“The hardest part was my bottom”, Mike told us at the end of the session. But that didn’t stop him to go ahead with the tattoo until the work was completely done…

OUAHHH, Once finished the outlines by Tony, Mike had all his body part filled in black ink before starting to use colors. It took three days to complete every single part of his back, then took a break for five days before carrying on this massive artwork.

He was missing the needle’s so much during his break that he was looking forward to coming back again to complete his body suit… After two days, he was here again with us.

Monday 6th August, Mike was back, stronger and determined and ask to get a second artist to help finish his MASTERPIECE tattoo…Ton joins Tony then together as a team they get ready to make this fantastic masterpiece complete.

7 sessions, 8 hours each day totaling to a MASSIVE 56 hours!!! Mike was proud to say that he was now a “Warrior” of Pitbull Tattoo Studio. Strong on his mind he is a definitely another member of our Big Tattoo Family.

Brandon is an Australian guy, in his twenties, He came to our Tattoo Studio, to get a lot of ink on his head… Japanese style.

All was made by our free hand master artist Tony, our specialist for freehand tattoo design and Japanese tattoo work.

On his first session, Brandon got the right side of his head tattooed with a dragon face in Japanese Style.

He loved his first tattoo very much, that he decided to come back to do the second session only this time the left side of his head with another dragon face in Japanese style.

But the “Tattoo-addict” mind took over and nothing could stop Brendon on coming back again to get a tattoo on the back of his head… This time he chooses a Oni Japanese Mask.

Tattooed freehand! Brandon loved it and appreciated getting inked here!!! 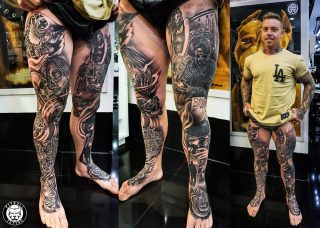 Jason from Australia, Melbourne, he came to Pitbull Tattoo by recommendation of his friend who did a tattoo with us.

He came to our Tattoo Studio in Phuket for a full sleeve tattoo, Chicanos realistic style, on both legs. Made by two artists Ton and Tony at the same time.

The two artists started to tattoo the lower part of Jason’s leg. One artist on each one!

This Warrior was very peaceful. Reading books… while getting tattooed!

The following sessions, the two tattooists moved upwards on both legs to finish the tattoo work masterpiece.

Jason had his job all done in three sessions. This happy and proud customer is now a “Warrior” and joined our Pitbull Tattoo Family. He said at the end of his session, he will be back to complete his bodysuit! 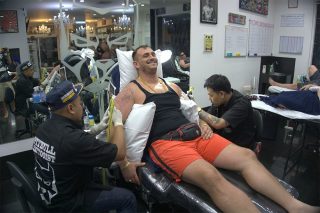 Eglor, Russian man, in his thirties came in as a walk-in customer to Pitbull Tattoo Phuket, Bangla road, and he got 2 full arm sleeve Realistic Black and Grey Style done.

He didn’t have any ideas about what kind of tattoo he wanted. Once he was here in our Studio and saw our tattoo work and talked to our supervisors as well, then he decided to get inked in our studio… The 2 full arm sleeves deal was done…

He started each upper arm with two artists on the same time.

This guy was very funny and his jokes made all our staff and the customers in the studio laugh.

The second session was the big session, 8 hours of tattooing each arm always made by 2 artists at the same time.

The third session was some touch-up, painless and cool to finish his 2 arm sleeve tattoo.

Eglor is one of our “Warriors” that proudly joined the Pitbull Tattoo Family!