Are you looking to get a vibrant tattoo with symbolism behind every twist and turn? If so, Japanese tattooing is certainly the best style of tattoo for you.

It’s one of the most ancient styles of tattoo art, and yet it remains both one of the most beautiful styles and one of the most popular. There’s just something about the combination of elegant lines, eye-popping colors and mythological creatures that modern body art fans can’t seem to get enough of.

This particular style of tattooing has a wonderfully interesting history, too. It’s steeped in ancient traditions, yet it’s now practiced all over the world. One of the most notable things about the Japanese style is that every symbol, placement, and icon can change the meaning of a tattoo entirely, and that’s what we’ll be going over in more depth today.

In this blog post, we’ll be taking an in-depth look at Japanese tattoos. We’ll be going over why the history is so fascinating, the introduction of modern styles and influences, and the styles and subject matter that you can expect to see in this beautiful art style.

If you’re looking for more tattoo content or advice on a piece that you’d like to get done, make sure to get in touch with us. We’re industry experts based in Phuket, Thailand, and we’re dedicated to making sure that our clients get the most beautiful pieces of personalized art possible.

The history of Japanese tattoos

Before we get started on how Japanese tattoos look in the modern world, it’s worth noting how the history looks. As we’ve mentioned, it’s incredibly vibrant, and it’s very interesting to read about too.

Records of tattooing in Japan go as far back as tattooing in Ancient Egypt. Clay figurines with painted faces and engraved tattoo marks were found in tombs, and they have been dated back to roughly 5000BC.

The first time that tattoos were written about in Japanese history was actually in a Chinese piece of literature, strangely. A dynastic history compilation described how Japanese people tattooed themselves, and branded it barbaric. As many Japanese rulers followed Chinese precedent, this led to the negativity that still follows tattooing in Japan to this day.

From the 7th century up until roughly the 17th century, tattooing was actually used as a penal practice to punish criminals. Towards the end of the 17th century, decorative tattooing began to rise in popularity, which is good. Unfortunately, there’s still a lot of stigma surrounding tattooing today in Japan, although this is changing as the years go on.

At the beginning of the 18th century, tattoos became even more popular, due to the invention of the woodblock and development in the illustration world. Although, at the end of the 18th century, laws were passed against tattoos once again. Oddly enough, these laws did not include Western people who wanted to get tattooed in Japan. Many incredible artists made their living off of tattooing foreign sailors, due to this legal influence.

It was the 19th century where Japanese tattooing really came into its own. This century brought out much of the art that we associate with Japanese tattooing to this day, and easing up on the legal side allowed many more artists to blossom. Japanese tattooing still relies heavily on the traditional techniques and subjects that rose to prominence in this era, but it’s understandable as they’re completely iconic.

Overall, Japanese tattoos have had a wild history, with lots of back and forth about their legality and status in society. It’s incredibly interesting to read about, and we’d encourage you to spend more time on this topic if you enjoy reading about art in general.

The rise of neo-Japanese tattoo art

This mainly refers to the inclusion of more detail, a wider color palette and newer techniques and materials. Neo styles do still lean on their old-school routes heavily, but they embrace the more modern aspects of tattoo technology and the relevant techniques to add a twist to the art. They’re very distinguishable from old-school pieces if you put them side by side.

Something that’s encouraged the rise in all neo styles is social media. There are so many intriguing artists on social media that are modernizing old school styles, and many people working at conventions the following suit too.

Techniques and methods in Japanese tattooing

It’s also worth going over the particular techniques and methods that are associated with Japanese tattooing, too. These methods will have changed over time in modern studios, as the tattoos would have originally been hand poked by old-school tools. If this is something you’re interested in, don’t be put off! There are still plenty of people who do this in Japan.

If you’re really intrigued by the old-school method of tattooing, look into irezumi and tebori. Irezumi means tattoo in Japanese, and tebori is the term that’s used to describe tattooing with traditional implements in a Japanese style. It’s done by hand, with tools made of wood, metal, and silk. There’s a particular ink that is required for the tattoo to be considered traditional.

In terms of modern techniques, linework is often bold and elegant, with plenty of twists and turns. Color palettes are often jewel-like, with black, smoky clouds in the background. Despite the vibrancy of the color, shading is often very soft and delicate. It takes a very talented artist to be able to do this successfully.

As we mentioned earlier, there’s a lot of specific symbolism in the world of Japanese tattooing and a lot of common subject matters too. No matter if you’re looking at traditional work or newer work, you’re sure to find some similarities between them in subject matter. Here are some of the more common ones that you might find:

As you can see, there is a wealth of subject matter to enjoy and explore in the world of Japanese tattooing. The symbolism and history are rich, and they’re incredibly pleasing to the eye as well, which is why they remain so popular to this day.

To sum it up

Overall, Japanese tattooing is incredibly beautiful and worth looking into if you’re a body art fan. The history is simply fascinating, and the level of detail showcased in this style is absolutely breathtaking. It’s been truly revolutionized by modern techniques and styles too, and it remains one of the most popular and most gorgeous tattoo forms to this day.

Are you looking to get a beautiful, bespoke piece of artwork? Do you want to find out more about the process of getting tattooed in general? Unsure about whether your tattoo would be a good idea or not? Our studio, Pitbull Tattoo, is based in Phuket, Thailand and we’d love to help you out. Our team is experienced in a number of different styles, and we’re committed to providing the best customer experience possible. 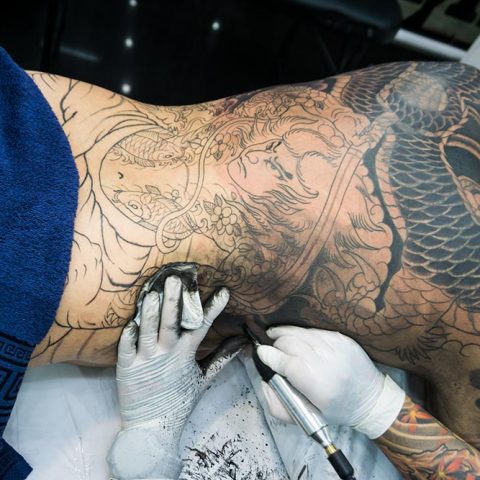 The ultimate guide to getting a tattoo in Thailand