Tattoos have a beautiful and complex history. Body art can sometimes be passed off as just a ‘passing trend’ or something that teenagers do just to annoy their parents, but tattoos actually have an incredibly rich background, with roots in plenty of different cultures. Whether you’re a body modification fan living in London, Tokyo or Phuket, there will be an area of tattoo history that applies to your local culture.

There plenty of different styles and tattoo techniques that are worth knowing about, if you’re interested in tattoos. There are some styles that have ties to religion and spirituality, like Sak Yant tattoos in Thailand, which are traditionally performed by Buddhist monks in temples. There are also styles that relate deeply to family or personal identity, like Polynesian tribal tattoo pieces.

In this article, we’ll be going over the main pieces of history that you need to be aware of if you’re interested in tattoos at all. This isn’t a comprehensive history of course, but it is a summary of some of the most intriguing and beautiful parts of the history.

One of the most important things to know with any historical topic is where the whole topic originated from. In the case of tattoos, one of the main origin points that historians point back to is Ötzi the Iceman.

Ötzi is the first recorded case of a heavily tattooed mummy being found. He was found in 1991, between the Austrian and Italian borders, and is believed to have lived between 3400 to 3100 BCE. He’s an important person to know about, as he proves that tattooing has been around for a very long amount of time.

Ötzi was found with 61 individual tattoos, which is a hefty amount. They are all very minimalistic, black in color (as they would have been made with soot) and are placed in various locations around his body. The discovery of his tattoos led to a lot of debates amongst historians, who were conflicted on what the meaning or purpose of his tattoos were. The general consensus is that they were for pain relief in a similar form to acupuncture, as the areas on his body that were heavily tattooed all had some form of bone degeneration.

Another important area of tattoo history to note is ancient Egypt. The discoveries of tattoos and tattooing tools had huge impact on modern tattoo culture, in terms of popular designs and general knowledge

One key scenario related to ancient Egyptian tattoos is the discovery of the Deir el-Medina mummy. This mummy was covered in beautifully ornate tattoos, ranging from ‘wadjet eyes’ and lotus flowers, to religious imagery like cows with sacred ornaments. The tattoos on this particular mummy were indicative of her status- it’s believed that she was a high priestess of the goddess Hathor, due to the imagery that was used.

There were countless other scenarios relating to tattoos in Egypt. Something interesting to note is that Egyptian tattooing appeared to be an almost exclusively female practice, based on the artefacts and mummies that were recovered. One popular tattoo for women was a web of dots placed over the abdomen: this would expand with the woman’s body during pregnancy, and it’s believed to have given protective energy to the mother and child. In general, geometric and simple line tattoos were very common.

Further evidence of tattooing in ancient Egypt comes from numerous artefacts that have been recovered from tombs and sarcophaguses. Figurines were found in tombs from 4000 – 3500 BC that depicted women with tattoos, and there were also female figures in tomb paintings that showed off body art. Many bronze implements were also discovered at the town site of Gurob, which were later determined to be tattoo tools.

Another really important area of tattoo history to be aware of is Celtic art. The Celts were an intriguing group of people, who spread their culture through word of mouth rather than writing much of it down. Thus, a lot of their history is unknown prior to their interaction with other cultures like ancient Greece or Rome.

Celtic art is very beautiful. They work with a lot of intricate knotwork and spiralling patterns, and also use many natural symbols like animals and flowers. Knotwork is a very key part of Celtic art- the interlacing knots represent the intertwining natures of the physical and spiritual worlds, and the endless paths can represent how love and faith are immortal.

Knotwork in painting and tattoos originated in the UK, but Celtic missionaries ensured that the style was spread to Europe as well. Later on, Viking raiders appropriated a lot of Celtic art styles to mesh with their own styles, which has led to the hybrid styles that we see nowadays. When the Christians came to the Celtic areas of the UK, the monks liked their art so much that they appropriated some of it too. This is where the famous tree of life and Celtic cross symbols originated from.

Chinese tattoos are another very crucial part of tattoo history. One important thing to note is that tattoos haven’t always been as welcome in Chinese culture as they have been in other cultures e.g. ancient Egypt. Throughout history, many people in China have viewed tattoos as defamation of the body and detrimental to a person’s character.

A lot of knowledge about Chinese tattoo art originally came from popular literature. A great example of this is The Water Margin, which is a famous novel that discusses 12th century bandits. A key reference to tattooing is made here in this book, where it says that the infamous bandit Song Jian and all 108 of his companions were covered head to toe in elaborate tattoos.

The attitude towards tattoos nowadays in China is generally more positive and accepting, but there is still a prejudice against tattooed people. This is due to the fact that Mao Zedong banned them in the Cultural Revolution, naming them as ‘manifestations of impurity and roguery’. The Chinese military still has a ban on having tattoos, and lots of businesses will turn people down for jobs if they’re tattooed.

Arguably one of the most popular and vivid areas of tattoo history, Japanese tattooing is still very beloved to this day. Japanese tattoos are incredibly beautiful- they’re either brightly coloured, or drawn in soft black and grey shades.

Much of the original history behind Japanese tattooing is similar to the history of ancient Egypt’s tattoo history. Figurines, icons and masks with ornate tattoo designs and paintings were all recovered from tombs that dated back to at least 5000 BC. The first time that they were mentioned in literature was in a Chinese dynastic historical compilation; this was a common occurrence. However, the practice was not spoken of highly by the Chinese, as they viewed tattooing as barbaric.

Interestingly, this prejudice against tattoos did become prevalent in Japanese culture over time, as they adopted many of the Chinese traditions. In the 7th century, tattoos were used as a punishment to brand and identify criminals.

Thankfully, near the end of the 17th century this penal practice was almost completely gone, and in the 18th century, the beautiful, pictorial style of Japanese tattoos really blossomed. This new interest in tattoos came with the developments in pop culture. One key advancement here was the invention of woodblock printing. Additionally, a Chinese novel called Suikoden bought even more attention to tattooing. It featured many tattooed heroes, and Japanese illustrators produced their own version of the story.

One particularly important part of tattoo history is 18th/19th century England. 18th century English tattoos revolved heavily around sailors getting tattoos to commemorate their voyages and achievements. By the middle of the 18th century, you could find a bustling tattoo shop in pretty much any English port.

Interestingly, it was the upper class/royalty who popularised tattooing. In 1862, the Prince of Wales travelled to Jerusalem and got a holy cross tattoo. Many upper class citizens followed suit and it soon became a trendy thing to do as a rich person.

In the 19th century, the trendiness of tattoos turned around completely and it became much more associated with freakshows and sideshow attractions. Heavily tattooed men and women were very popular attractions, as they often had very outlandish stories about being kidnapped by so-called savages and forcibly tattooed. For tattoo artists, freakshows and circuses were great for business, as they were a great source of customers and exposition.

As with any area of history, there are a number of important people that we should pay homage to here. Sir Martin Frobisher is also someone of note in tattoo history. He was an English seaman/privateer, and on a voyage in 1576 he encountered tattooed people for the first time. Unfortunately, he decided it was acceptable to simply remove people from their homes and bring them back to England to show them off. One key example of this was an Inuit tattooed lady named Arnaq. Tragically, she died very soon after being brought back to England, and her portrait can be seen in the British Museum in London.

Someone else that is worth knowing about is James Cook, as he was one of the first people to bring mainstream attention to tattooing. He was an explorer, and his first voyage (on the HMS Endeavour in 1768) resulted in the first written account of tattooing. This is due to the artists and naturalists on board, who drew pictures and wrote about the tattoo art in Tahiti that they saw.

One of the key people in tattoo history is Samuel O’Reilly, who patented the electric tattoo machine in 1891. He was a famous tattoo artist, and ended up tattooing some of the most famous sideshow workers, such as Annie Howard and George Mellivan. His machine was based off of Thomas Edison’s technology, and other tattoo artists had been tinkering with the technology before O’Reilly’s patent.

To sum up, tattoos and body modification have an incredibly rich and diverse background. They span almost every culture, from London to Phuket, and have been affected by every subject from religion and war, to family and love. It will certainly be interesting to see where tattoos go in the future and how people develop this intriguing art form. Will we have color changing tattoos that match our moods? How about digital tattoos that let us monitor our health or happiness? Only time will tell.

If you’re in Phuket and looking to get a beautiful piece of tattoo art, make sure you check out Pitbull Tattoo Phuket. Our studio is full of incredibly talented and experienced artists who would love to help you create a stunning piece. Feel free to get in touch with our team to see how we could help you today. What are Sak Yant tattoos? History, meaning and designs 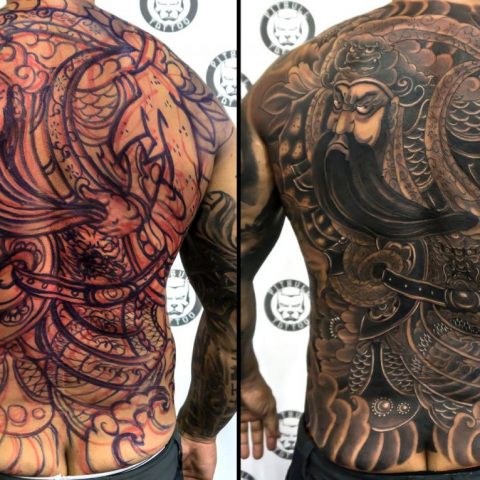